How to tell a fake Longchamp Le Pliage bag

How to tell a fake Eileen Gray Adjustable E1027 sidetable 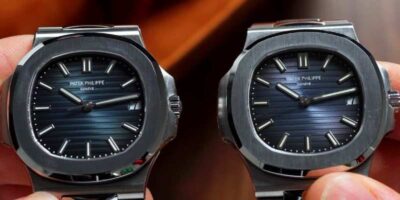 How to tell a fake or genuine Patek Philippe Nautilus

How to tell fake vs genuine perfume

The well-known bag Le Pliage is the best seller of the French fashion house Longchamp. The bag has been counterfeited thousands of times worldwide because of its popularity. And that’s why here are the tips for you on how to tell fake Longchamp Le Pliage bag.

The label’s famous logo, consisting of a horse and a jockey, should always be positioned precisely centered over the Le Pliage shutter button. Jockey and horse always point to the left in the original logo, so pay attention to such small things, because fakes often do not show these exact details. The round metal fastener has the lettering Longchamp 1948 on the outside and a modified shape of the logo is punched in the middle of the button. This is one of the first ways to tell a fake Longchamp Le Pliage bag.

The material of the leather flap on the outside is more like the structure of a diamond or many small diamonds. Therefore, make sure that the pattern consists of relatively straight and diagonal lines. The inside of the leather tab, on the other hand, is slightly roughened, but still feels super soft. The closure button of the original copies contains inside the inscription Original Prym 6/4B, models made after 2013 with the lettering Longchamp Longchamp. It is also best to check whether the logo is easily pressed through and is easily visible in the inside, because this is not the case with many plagiarisms.

A close look at the text embossing of the back of the leather tab can also quickly expose fakes. There are two lines with lettering, which vary according to the year of manufacture and model. For new models, the first line contains the inscription LONGCHAMP. For the second line, the exact model of the Le Pliage is now important. Usually, the lettering is composed as follows: LE PLIAGE <Model Type>- MOD-LE D-POS. Accordingly, the model type is either SHOPPING, TYPE “S”, TYPE “M”, TYPE “L” or TYPE “XL”. Make sure that the letters for each model name are actually indicated in quotation marks and that the accents on the lettering or hyphen are not missing. If you have your Le Pliage in your possession for a long time, these text embossings may vary.

At the zipper pull of the Le Pliage is again the Longchamp jockey with horse as well as the inscription Longchamp and the founding year 1948. In the case of older models, it may well be that it is not the founding year that was attached to the zipper, but rather the seat of the label, namely Paris and France. The zipper also contains the “YKK” and “T” embossed on the side and “1948” on some models.

All original Le Pliage bags are finished inside with the same color as the exterior. In addition, check whether the part of the closure button inside the pocket has been reinforced with a round plate. This detail is often ignored by many counterfeiters and can therefore give an important indication to tell fake Longchamp Le Pliage bags.

So that you are well prepared against the counterfeiting industry, we have many more fake checks for you of all trendy luxury and trend brands in our fashion category.

How to tell a fake Eileen Gray Adjustable E1027 sidetable

How to tell a fake or genuine Patek Philippe Nautilus

How to tell fake vs genuine perfume