How to make a wood veneer pendant light

How to recycle tetra packs into planters 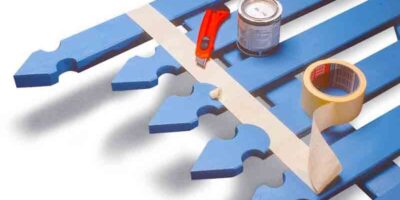 First of all, since I only had the one coil of veneer lying around, I didn’t want to make a mistake with the design and ruin that piece. So to start with I played around with cardboard strips and a cardboard tube until I got the shape how I wanted it.

That would give me the final proportions, and from there it be just a matter of scaling up by to increase the size.

Since I had already had the Plexiglas tube with a diameter of 12 cm for the real light, this was my fixed measure. For the model I needed the following things:

Now it was a matter of recreating the veneer in cardboard strips. A lot of rumbling, pushed, shortened, wider, narrower but at some point it fit quite well. Later I needed 16 veneer strips with a length of 74 cm and a width of 5 cm. Not bad such a model, and trying it first in cardboard was definitely worth it…

I wasn’t sure how to get the veneer attached to the pipe, screws, tacklers… A lot went through the head… But in the car on the way to the construction site, the idea came to me – rivets. Good, so a small list for lamp construction:

The first thing I had to do was cut the veneer strips. I thought I just put them on top of each other and saw them all at once, but that’s not possible, as it wrecks the sawn edge. So all the stripes were cut out individually with the sharp box cutter.

To arrange the holes for the later rivets evenly around the tube, I drew a small template. a circle with a diameter of 12 cm and a line every 22.5°.

Now you put the pipe on the drawing you can easily take over the subdivision. Make a mark at each radius where it hits the pipe. Then measure 2.5 cm from the edge of the pipe and drill there (see image below).

The veneer strips are riveted on one side at the top and at the bottom on the opposite side. Quite a simple principle, but with a nice result, I think.

Then saw a hole in the acrylic lid to put the cable through.

Then stick the lid on top with a silicon sealant. Let that dry (with weights on it to help bond it) and cure before you assemble and hang the lamp. Even though the lamp weight is very light, properly cured silicone will be much stronger than if you put any weight on it too early.

If you still fancy a colorful textile cable, you can easily modify the IKEA lamp holder. To dismantle the socket, the first thing to do is to unscrew the small nut at the top of which the cable comes out. Then press the small black nut in with a small screwdriver to unscrew the “shell”. Once you have done this, you can replace the cable and reassemble everything.

I myself am amazed at what the lamp casts through the wood for a beautiful light, almost as if you had candles on. You could do a lot of different shapes, by playing around the with cardboard until you found something you liked.

How to recycle tetra packs into planters